How to Ctrl-Alt-Del on Mac

Wondering what the Control-Alt-Delete Mac equivalent is?

If you're new to the world of Mac, you might be wondering how you can override a troublesome app and shut the program down, using a similar command to Windows' famous Ctrl-Alt-Del.

The good news is, it's pretty straightforward, and there's more than one way. So let's get started straight away and take a closer look.

What is Control-Alt-Delete on a Mac?

Well, as you've probably already discovered, there isn't an exact keyboard shortcut that reenacts the Windows Ctrl-Alt-Delete command. Instead, as you'll learn from this article, there are always multiple ways to do it.

Here's just a few ways you can terminate apps:

All of these methods are the Ctrl-Alt-Del Mac equivalents, and the best news of all, we'll take a look at them all in this article.

When to force quit an app?

There's a couple of reasons you might need to force quit a program or process, including:

Well, here you have it, some of the most popular ways to Control-Alt-Delete on a Mac.

How to Control-Alt-Delete on Mac

This method has to be number one on the list; not only is it as close as we get the Windows Ctrl-Alt-Delete, but it's the quickest method too. Here's how: 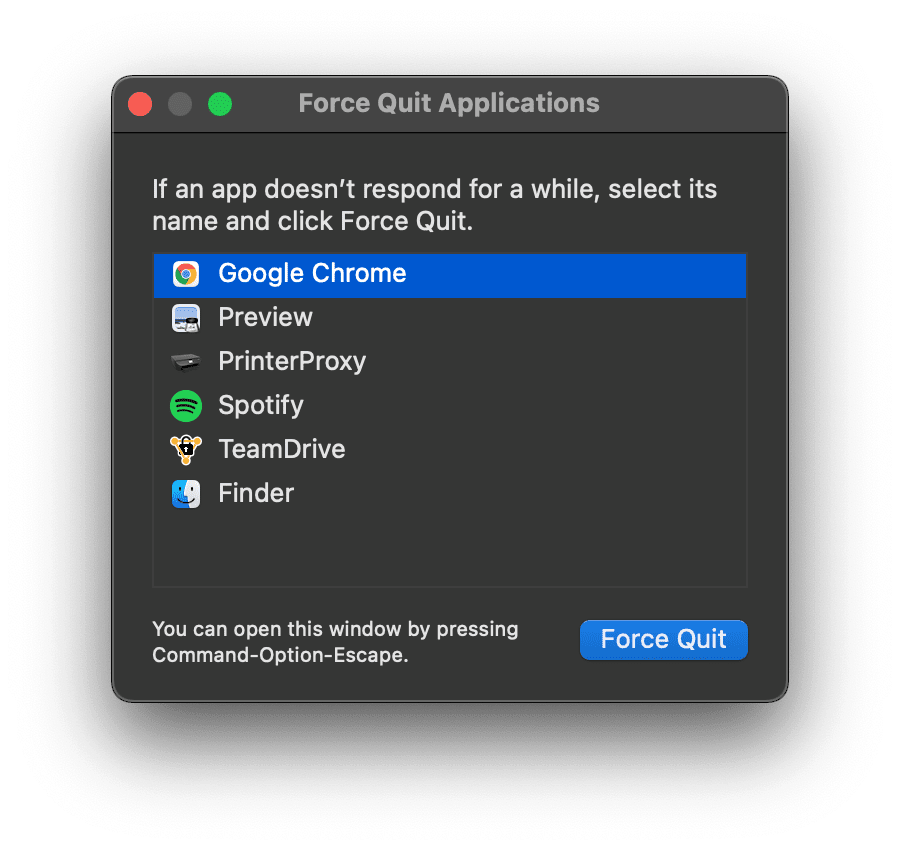 How easy is that? Well, this is Apple, so if you don't like this method, we've got plenty more; keep reading.

The next Control-Alt-Delete equivalent for Mac is to use the Apple menu to force quit any app. Here's how: 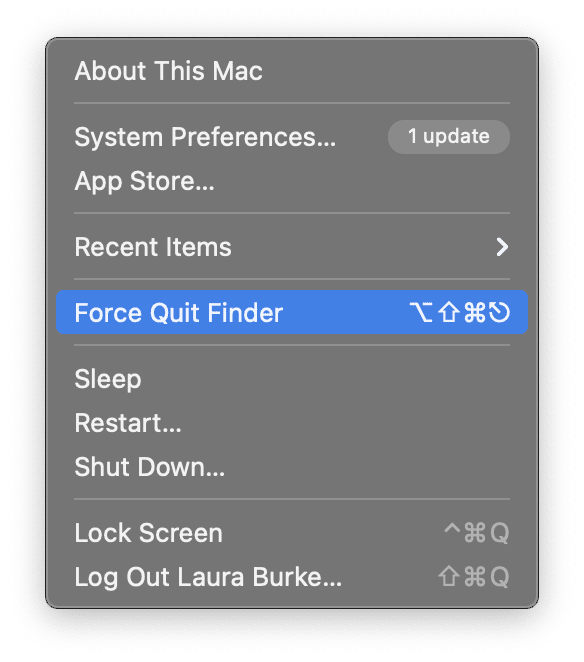 The Dock is another way we can quickly terminate stuck apps. Here's how:

You're probably thinking, why would you need so many different ways to do the same thing? Well, I haven't got the answer to that, but I have got another method for you, just in case you don't like the ones above.

Activity Monitor is a handy tool to know your way around when you are suffering from troublesome apps, a sluggish Mac or stalled processes.

You can use Activity Monitor to locate an unresponsive app quickly and force quit it; here's how:

If you're a Terminal fan, you'll be pleased to hear you can run a command in Terminal to force quit apps, too; here's how: 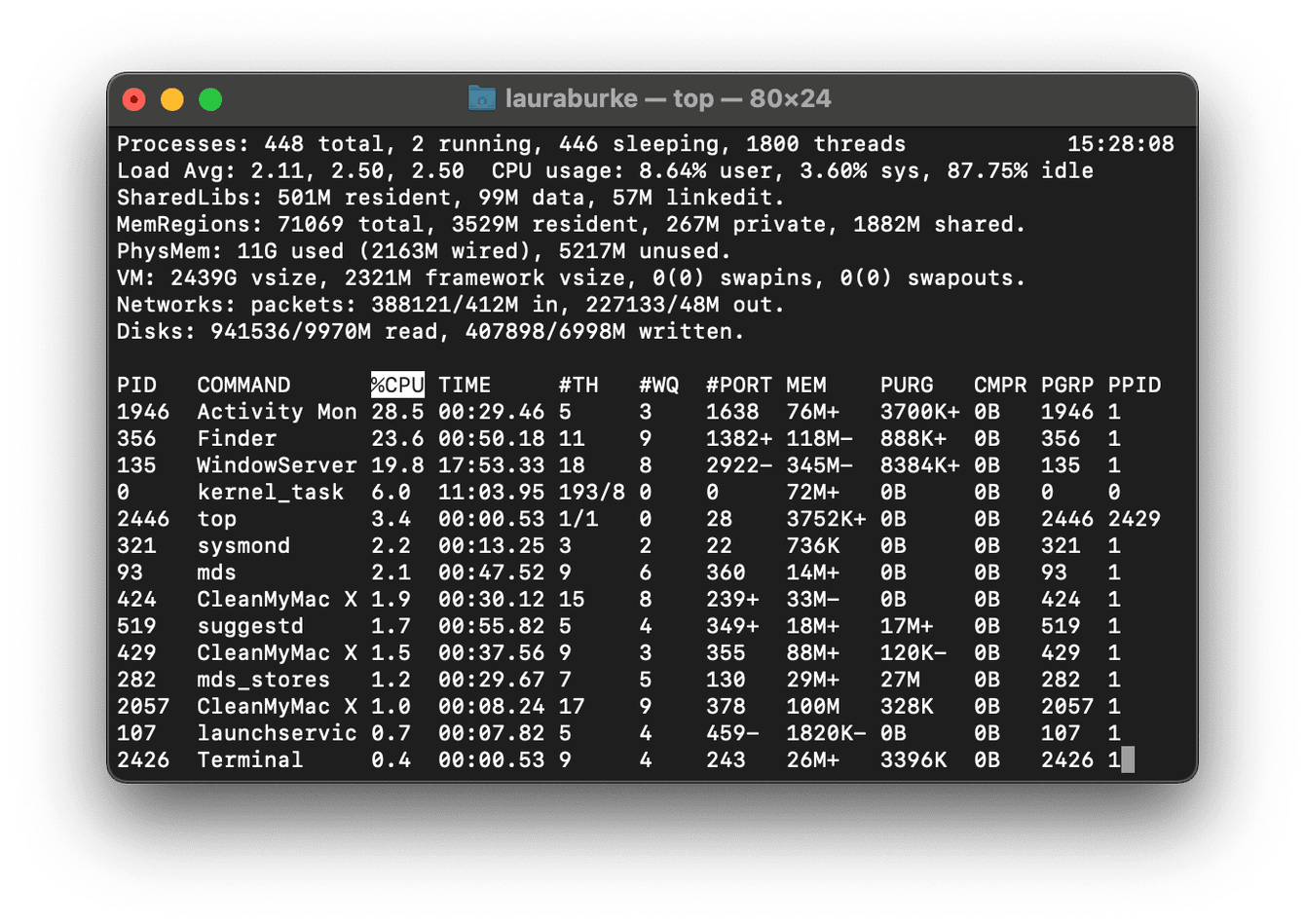 kill (replacing 111 with the PID number)

That's it. Terminal isn't for everyone; thankfully, we've got lots of options when it comes to the Control-Alt-Delete for Mac.

If hung applications are a regular thing, it might be worth delving in a bit deeper and trying to uncover why they are constantly stalling. If you're interested, jump to the next tip.

How to deal with hung applications

Now you know all the different ways to Control-Alt-Delete on Mac. You can, of course, keep using these every time your app stalls, there’s an easier and quicker way to identify those stuck apps.

Download the free version of CleanMyMac.
Click on the small iMac icon in the top menu bar. 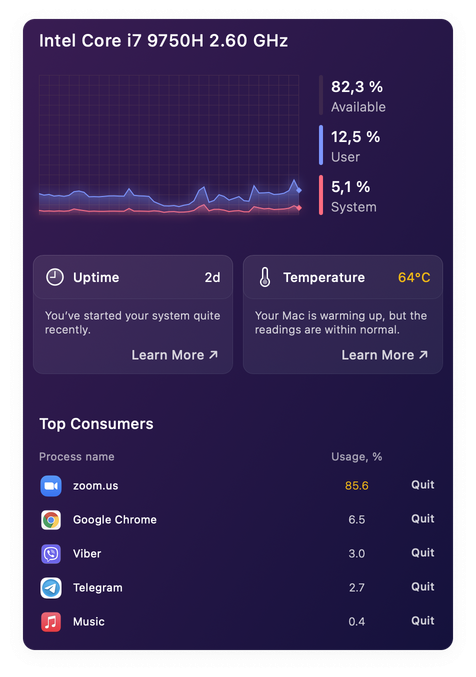 This opens the Menu. And here you got tons of real-time insights about the inner workings of your Mac. For example, if you click on CPU you’ll see the top processor-hoggers. And just like the Control-Alt-Delete on Windows, you can quit any app in a blink. So if you have any Heavy Consumers or Hung Items, you can shut them safely down here; simply follow the on-screen instructions to increase your Mac’s output.

Well, there we are. We've reached the end. Now you know what the Control-Alt-Delete Mac equivalent is and all of the different ways you can do it on a Mac.

Which is your favourite?